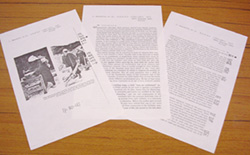 The Human Relations Area Files (HRAF), developed by George. P. Murdock, is a file reference. Specialists have collected documents (books and research papers, etc.) written on various ethnic societies and cultures around the world, and classified them according to region and ethnic group. They are further classified according to content utilizing a unique classification system. The headquarters of the Human Relations Area Files, Inc. which is a non-profit consortium for providing the HRAF files is located on the campus of Yale University.

Firstly, an HRAF file is classified according to its area and ethnic group using a method called "Outline of World Cultures (OWC)". OWC divides the world into eight areas, and labels them using the following alphabetic code.

Once a file is categorized according to the OWC system, it is further categorized according to the the topic of its content, using the Outline of Cultural Materials(OCM) categorization system. The OCM, represented by a three digit numeric code, is a comprehensive method to classify the various behaviors of human beings, social life, customs, and production of goods, etc. For instance, a section on 29 (Clothes) is classified as follows:

Because an HRAF file is categorized according to area, ethnic group and topic, information can be obtained easily. To illustrate, you can easily make comparison among areas or gather statistics relating to a theme, "food culture", for example. At present, HRAF files are available as documents, micro files and web files (eHRAF).

Information about the HRAF Room

HRAF is available in a separate room next to the Minpaku library.
For particulars, such as opening hours, please inquire at the Library Counter.
E-mail:nme-lib@idc.minpaku.ac.jp