Permanent Exhibitions "The Culture of the European Region: From Christmas to Easter."

Christianity and the Folk Beliefs of People in Europe

Decorating Christmas trees stems from the worship of trees by the ancient Teutons. It is said that the tree itself represents the ‘tree of the knowledge of good and evil’ from which the forbidden fruit was plucked, and which appeared in a sacred play in front of churches in the Middle Ages. The ancient tradition of belief in the sacred power of trees was adopted into Christianity.


There is one more thing we mustn't forget about Christmas. It is the miniature of the stable recreating the scene of the birth of Jesus. Dolls representing the three Wise Men from the East and the Shepherds who came to worship the baby Jesus form part of the decorations in each house. Also, there is the Advent Calendar, a calendar for children which has flaps to be opened each day.

The play performed at the end of each year, telling the story that commemorates the birth of Jesus has a ceremonial element in which masks of animals and men are used to portray an agricultural aspect and ceremonial prayers for the abundance of the earth. 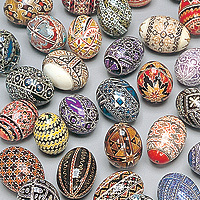 Carnival is the festival that precedes quadragesima or the four days of fasting that precede Easter, the period that celebrates the Resurrection of Jesus Christ. Carnival was originally a festival to end the winter and to prepare for the success of the coming spring. Its character is unique among all the events of the liturgical calendar.

On Easter, beautifully decorated eggs called Easter Eggs are exchanged as presents, and are popular among children as a source of pleasure. The egg is said to symbolize the reincarnation of life all over the world and therefore is also used on the day of the Resurrection of Jesus Christ.


The exhibition shows that the religion and folkways that existed before Christ are still present in the life of the Europeans.

Person-in-charge of this exhibition:SHINMEN Mitsuhiro
(Translated from the April issue of Gekkan Minpaku, 2003)