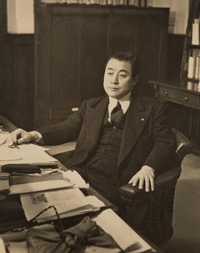 From childhood, Keizo Shibusawa (1896-1963) dreamed of becoming a biologist. Instead, however, he continued the legacy of his grandfather, Eiichi Shibusawa (1840-1931), who was known for his outstanding achievements in the business world, and who studied economics at university.

Keizo Shibusawa did not forget his love of scholarship, even after he became a banker. He formed a club with like-minded friends, and began studying toys in the attic of a storehouse in his garden. He called this the "Attic Museum".

His research began with toys, but was later expanded as he began collecting and studying articles used by ordinary Japanese in their daily life. For these articles he coined the term mingu, meaning "folk implements". Subsequently, Shibusawa broadened his research by conducting comparative studies of the material cultures of ethnic groups in countries around Japan, and by developing his own style of "folkloristics". 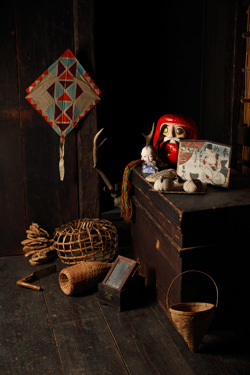 Shibusawa viewed museums as important research institutions. Thus in 1936 he proposed that the government should build a national museum of Japanese ethnology. However, this was not realized. So in 1939 he established personally the Ethnological Museum of Japan within the Japanese Society of Ethnology, in Hoya, Tokyo (now Nishitokyo City) in which he displayed the folk implements he and his fellow scholars had collected. Minpaku, which was established 35 years later, inherited about 28,000 artifacts from the Attic Museum, along with Shibusawa's philosophy of mingu research. In fact, the Attic Museum was really Minpaku's st2013 marks the 50th anniversary of Keizo Shibusawa's passing, and the "Keizo Shibusawa Memorial Project" was launched to commemorate this event. The project aims to undertake a comprehensive study of Shibusawa and his achievements, and to make the results available to the general public. This Special Exhibition being implemented by Minpaku is part of this Memorial Project. The exhibition displays articles for daily living that were handmade from readily available materials and used in different parts of Japan until about 1955. We hope that these artifacts will remind visitors of the way the Japanese used to live, and how their lifestyle was adapted to its natural surroundings.