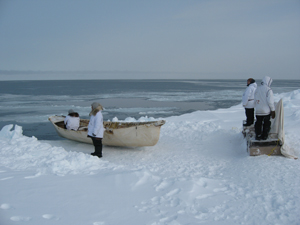 Inupiat Bowhead Whale Hunt (A photo was taken near Barrow, Alaska in early May, 2010 by Nobuhiro Kishigami)

This symposium aims at reporting and discussing various whaling activities and issues in the contemporary world, to understand changing human relationships with whales from several perspectives.
Whales are an informal grouping of the infraorder Cetacea, consisting of about 80 species or sub-species such as blue whale, sperm whale, small beluga, harbor porpoise, and so on. Humans have used whales for many purposes, most notably as food and industrial resources. Human-whale relationships are regionally and historically highly varied. In Japan, for example, dolphins have been harvested for at least the last 5,000 years, and in Alaska and Siberia whale harvesting by Iñupiat/Yupiit may have begun as early as 3,000 to 2,500 years ago. From medieval times until the 20th century, whales were used to provide food, lamp fuel, and for other purposes in Europe, North America, and elsewhere.
However, at the 1972 UN human-environment conference, in Stockholm, the representative of the USA argued that the environment could not be protected without protecting whales. This argument was further supported by environmental NGOs, such as the World Wide Fund for Nature (WWF) and Greenpeace, and many countries adopted anti-whaling positions, no longer regarding whales as industrial resources. Thus, the conference was a symbolic turning point in a history of human relationships with whales.
In 1982, the International Whaling Commission (IWC) amended the Schedule to the International Convention for the Regulation of Whaling (ICRW), an international agreement concerning the use and protection of large whales, by establishing a Moratorium on the harvesting of 13 species of large whales, beginning in 1986. As a consequence of this amendment the Government of Japan suspended commercial whaling in Antarctic waters in March, 1987, and off the coast of Japan in March of the following year. However, since that time neither pro- nor anti-whaling countries have obtained the three-fourths majority required to amend the Schedule, and commercial whaling remains highly contentious at IWC annual meetings.
Behind the political trends regarding the whaling issue, several international environment and animal protection NGOs have campaigned globally against commercial and other whaling activities. Since the late-20th century a feature of human relationships with whales began to change from whales as resources to those as a target of protection and/or preservation.
Although several Indigenous groups conduct whaling in Russia, the USA, Greenland, and St．Vincent and the Grenadines as “Aboriginal Subsistence Whaling” under the IWC, several Indigenous and local groups do so in Canada and Indonesia outside the IWC system. Also, many local and indigenous groups around the world engage in dolphin and porpoise harvesting, which is not controlled by the IWC. Japan carries out research whaling, and Norway and Iceland resumed commercial whaling with several conditions under IWC rules. These examples show that there are various whaling activities in many places. On the other hand, as several international environment and animal protection NGOs, such as WWF, Green Peace, Sea Shepard Conservation Society, have run various anti-whaling campaigns, they have influenced considerably many governments and general citizens around the world. This socio-political trend has made resumption of commercial whaling increasingly difficult, and began to influence negatively continuation of Indigenous and local small-scale whaling activities in many places.
This symposium discusses contemporary whaling situations and issues around the world. Also, it deals with various topics including international whaling politics, NGOs’ anti-whaling movements, animal welfare and animal rights issues concerning whale hunts, among others. We expect many people to understand and rethink historically changing human relationships with whales.
This symposium on contemporary whaling issues consists of two parts: a two-day international symposium in English and a one-day public symposium in Japanese.

This Symposium is organized by Nobuhiro Kishigami, The National Institutes for the Humanity and National Museum of Ethnology, Japan and is financially supported by the JSPS Grant-in-Aid for Scientific Research (A). “An Anthropological Study of Whaling Cultures in the Globalizing World” (Grant Number: 15H02617) and the National Museum of Ethnology’s Joint Research Project “Whaling and Environmental Ethics” (2018).