Tetsuro Watsuji’s typology of culture based on climate (fudo) was derived from observations he accumulated during his voyage from the Indian Ocean to the Mediterranean Sea, while Toshihiko Izutsu’s Oriental philosophy was a result of his exploration of universality (of humanity) through Islamic mysticism. Tadao Umesao established a theory of global civilization based on his discovery of the Chuyo (i.e., “Mediant,” as opposed to “Orient” or “Occident”) and proposed an area studies paradigm for the Middle East and Islamic world. In contrast to existing area studies which merely adhered to national interests, Umesao’s area studies was an intellectual endeavor that investigated a cluster of issues concerning humankind on a global scale.

In contrast to these three Japanese scholars, who envisioned the Middle East (chuto) as the third sphere between the East and West, Edward Said focused on unpacking the genealogy of discourses of “the Middle East/Orient” as a binary opposition to the West. He revealed the historical process in which European colonial powers established their dominance over non-Western countries by claiming the epistemological and ontological differences between the West and the “Middle East/Orient”. His work led to reflexive re-assessments of the relationship between the modern West and the non-West. When considering the exchange of cultural knowledge between Japan and the Middle East, however, one cannot ignore the West’s role as a cultural intermediary/place between the two, both of which perceive the other as “distant foreign lands”. A re-examination of the West as a mediator between culturally distanced two regions, vis-à-vis Japan and the Middle East, can also shed light on how cultural knowledge globally circulates in the contemporary world.

The drastic change in the relationship between knowledge accessible to a private individual and the public communication sphere has come to influence the mechanisms of social mobilization of individuals. It triggered the process in which culture became perceived as resource and gained publicness, as well as the integration of local life-worlds and global social spaces. Hence, it is important to probe how individuals make use of global cultural resources when engaging with society; how these actions impact one’s views on the local region and the global world; and whether environmental elements and embodied skills could be applied as mediators (variables) for classification. Our goal is to establish a paradigm for studying how pre-existing worldviews which have responded to the narrative politics that arise between personal spaces and institutional systems acquire global locality while scrutinizing the cultural exchanges between the “Orient (Japan) – Occident (Europe) – Mediant (Middle East)”. Furthermore, by critically re-evaluating the theoretical frameworks that have attempted to draw an epistemological map of global society, we hope to redefine “civilization” in the contemporary times.

In order for area studies to gain renewed value, it is pertinent for us to pursue “global area studies” to uncover the contemporary and dynamic connections between people and the world through field research by reorienting “areas” from the perspectives of globalization, as well as globalization from the perspectives of areas, while maintaining universal values. We strive to establish a paradigm that would allow us to examine the realities of social spaces co-created through the re-socialization of individuals and their mutual effects as well as the process of including/excluding pluralistic values from a standpoint of how individuals obtain information, store it as knowledge, and use it as a resource and how they connect their local life-worlds to global social spaces against the backdrop of global transformation of natural, social, and linguistic media environments.

To grasp the actual nature of this “global society”—which can be described as people’s “tactile” sense for one another—we are in need of “global area studies” which would allow us to approach cultural specificity and human universality on the same plane and to redefine various facets of everyday practices of people living in the areas in question as theses posted to humanity’s imminent future, rather than diminishing the issues affecting specific regions as local concerns. While searching for new ways of conceptualizing the world, we envisage that individual research projects on people and culture in global transformation would lead us to explore the possibilities of realizing the universal goal of humanity—a plural-values co-creative society. This is the greatest task placed on area studies vis-à-vis “global studies.” This discipline should be situated within the purview of the National Museum of Ethnology to pioneer academic realms by introducing a global social theory turn to area studies. 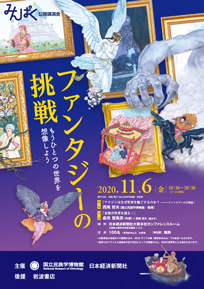 November 6(Friday), 2020, 18:30 to 20:30
Minpaku Public Lecture:
The Challenge of Fantasy: On Imagination and the Truth beyond Language
Venue Nikkei Hall