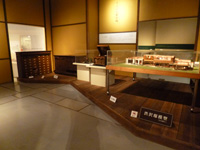 Keizo Shibusawa served as Governor of the Bank of Japan during World War II, and subsequently as Minister of Finance, when he devoted himself to the recovery of Japan’s devastated economy. He was also a patron of scholarship and a dedicated folklorist who exercised brilliant leadership in this field. Using the Attic Museum, which he established in his home as a base for his activities, he fostered many scholars and contributed to the advancement of “folkloristics”.
Here we introduce some of the many achievements of this highly accomplished and multifaceted man. Among other things, Shibusawa was an industrialist, the first Minister of Finance to be appointed from the private sector (under Prime Minister Kijuro Shidehara), an international goodwill ambassador, a philanthropist, an educator, and a fisheries historian. 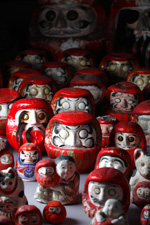 The Attic Museum's research began with toys. Although never completed, this daruma collection consists of about 100 daruma tumbler dolls, including mustached daruma. (The collection also includes works acquired after the establishment of the Ethnological Museum of Japan). 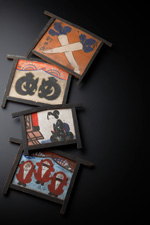 《Koema》
Ancient folk beliefs surround koema, or small pictorial votive plaques. These wooden plaques are used as sacred offerings at shrines and temples, a custom that originated with the offering of live horses and evolved into offering wooden plaques depicting a horse.
At an early stage the Attic Museum took an interest in and began collecting ema. Of the many collected, Shibusawa was particularly struck by the koema gathered in Tsugaru, in 1931. Intended to ward off the curses of animals, they were made at the instruction of the shrine maiden to depict the animal from which protection was needed. They were attached to a stake stuck in the ground. When he saw them, Shibusawa wrote, “I felt as though I had touched an open and naked heart.” 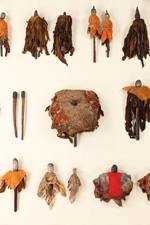 《Oshirasama》
Belief in Oshirasama, the God of the Home, is common throughout northeastern Japan. The exhibition introduces a collection of 33 images that represent the first National Important Tangible Folk-Culture properties designated in Japan. Because of the custom of adding a layer of cloth each year, these artifacts are shrouded in cloths layered in chronological order. Shibusawa recognized their value as records of textiles and dyeing techniques used in rural villages in modern times. “I know it sounds excessive but I couldn’t help exclaiming that it was like a ‘private Shosoin, the imperial treasure house in Nara’.” He conducted detailed analyses and studies based on this collection. 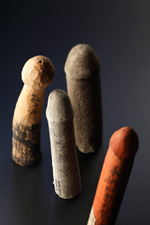 《Phallic Symbols and Sex Worship》
Genitalia have been worshipped throughout the world since ancient times. In Japan phallus-shaped stones and clay figures engraved with female genitalia have been found in archeological remains from the Jomon Period. It is presumed that they were used for occult or religious purposes. Every region in Japan had folk customs worshipping wooden, stone and clay phalluses and female genitalia, and using them to ask for successful marriages, harmonious spousal relations, perpetuation of descendants, bountiful harvests or commercial success, recovery from illness, and safety. During the Meiji Period, however, such customs were banned by the government as barbarous, and many such objects of worship and votive offerings were either destroyed or removed.
The Attic Museum classified “religious implements” as mingu (“folk implements”) and many were collected. 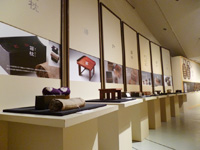 The term mingu (“folk implements”) was coined by Shibusawa. Before that, the terms dozoku (“local customs”) and dozokuhin (“local implements”) were used. Shibusawa, however, regarded them as condescending, and began substituting minzoku-hin (“ethnic implement”), and then mingu.
Many of these mingu or “folk implements”, which not so long ago were ubiquitous in daily life, now have vanished. This demonstrates how our lifestyles have been changing. 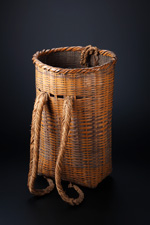 In addition to half-soled sandals and fish traps, various types of backpacks were another folk implement actively collected by the members of the Attic Museum. Not only were backpacks interesting because of regional differences in their shape and production method, but, as the Attic Museum members’ understanding of transporting goods deepened, they were able to compare these implements with the practice of carrying goods on either the head or the shoulders.
In 1955, part of the collection of backpacks in the National Museum of Ethnology was designated “Folk Material”, under the Act on Protection of Cultural Properties. They are now designated as “Important Tangible Folk-Cultural Properties”. 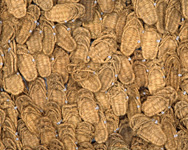 Half-soled straw sandals have no heel, and are tied at the front. They prevent slipping and do not splatter mud easily, so they have been used since ancient times as a very practical form of footwear. The study of half-soled straw sandals was the first serious joint study undertaken by the Attic Museum. Samples, including over 100 sandals collected by blind female traveling musicians, known as Takada Goze, were collected from around the country, using a national network. Among other topics, data on the construction and nomenclature of the sandals were collected and analyzed. Some of the methods used in the analysis were groundbreaking. In particular, X-ray photographs were taken of the sandals, despite X-ray technology then having been put to only limited use in medical practice.

Salt baskets were used in daily life to store salt. Enzoku Mondoshu represented Shibusawa’s report on his study of various folk traditions related to salt, which were gathered from every region of Japan. This included storage methods using baskets and religious beliefs concerning salt, which he examined from diverse perspectives. The method he employed in this study, sending a list of questions for collaborators to answer, was a forerunner of the modern questionnaire survey. 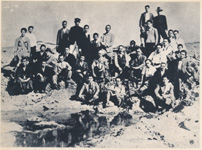 Shibusawa placed importance on having many people involved in the study of each region and folk implement, in order to elicit different perspectives and impressions, and to promote the exchange of opinions.
The study implemented in 1934 on the islands of Satsunan Jitto (a group of 10 islands in southern Kagoshima Prefecture) was the largest joint survey organized by the Attic Museum. It involved a team of about 20 researchers that included not only folklorists, but specialists in many other fields. The study is highly significant for Shibusawa’s “folkloristics”, since it planted the seeds that would later germinate in the concept of the Joint Researches by the Council of Nine Learned Societies, promoted by Shibusawa after World War II. The joint studies conducted by Minpaku since its inception is also a continuation of this approach.